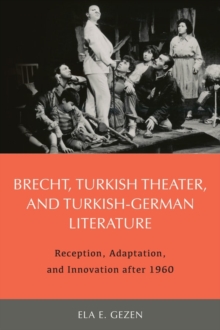 Bertolt Brecht died in 1956, but his theory and practice has continued to shape debates about the politics of culture - not only in Germany, but in Turkey as well, where a new generation of intellectuals emerged during a period of liberalization in the 1960s and sought to link culture to politics, art to life, theater to revolutionary practice.

Ever since, Brecht has connected two cultures that have become ever more intertwined.

Drawing upon archival research and close textual analysis, this study reconstructs how Brecht's thought was first interpreted by theater practitioners in Turkey and then by Turkish writers living in Germany.

Gezen first focuses on Turkey in the 1960s, reconstructing theater programming and critical debates in literary journals in order to explore how Brechtian stage productions thematized issues in Turkish politics and cultural affairs.

She then traces the significance of Brechtian theater practice and aesthetics for Aras OEren (1939-) and Emine Sevgi OEzdamar (1946-), two important writers, actors, and dramatists who emigrated to Germany.

By shedding light on their theatrical involvement in Turkey and East and West Germany, this study not only introduces a new context for comprehending individual works, but also enhances our understanding of the intellectual interchanges that shaped the emergence of Turkish-German literature. Ela E. Gezen is Associate Professor of German at the University of Massachusetts, Amherst.