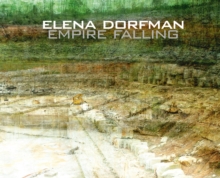 In Dorfman's epic tableaux, the ancient sedimentation and erosion found at these sites form the basis for her complex and highly layered compositions. "I manipulate and reconstruct the landscape," she says, "reassembling the pictures just as the oldest rock begins at the bottom and works its way up to the surface." Empire Falling presents the abandoned and active quarries of the Midwest in Indiana, Kentucky and Ohio.

Executed over the course of several years, Dorfman's images record both the minute and radical workings of nature, as these spaces give way to human intervention and exploitation.