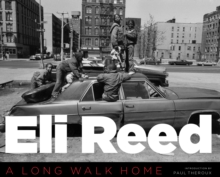 Award-winning documentary photographer Eli Reed's "long walk" has been a journey that has taken him from a low-income housing project in Perth Amboy, New Jersey, to Harvard University and to membership in the elite international photojournalists' collective, Magnum Photos.

Reed's quest to understand "what it means to be a human being" has given him an extraordinary empathy with the people he photographs, whether they are Lost Boys in Sudan, the poor in America, or actors in Hollywood.

In a photographic career spanning five decades, Reed has been the recipient of a World Understanding Award from POYi (Pictures of the Year International), Lucie Award for Achievement in Documentary, World Press Award, Leica Medal of Excellence, Overseas Press Club Award, and a Nieman Fellowship at Harvard, as well as a runner-up for a Pulitzer Prize. Eli Reed: A Long Walk Home presents the first career retrospective of Reed's work.

Consisting of over 250 images that span the full range of his subjects and his evolution as a photographer, the photographs are a visual summation of the human condition.

They include examples of Reed's early work; a broad selection of images of people from New York to California that constitutes a brilliant collective portrait of the social, cultural, and economic experiences of Americans in our time; images of life and conflict in Africa, the Middle East, Haiti, Central America, England, Spain, South America, and China; portraits of women and Hollywood actors; and self-portraits.

Reed's artist statement and an introduction by Paul Theroux, whom Reed met while working in Africa, complete the volume.