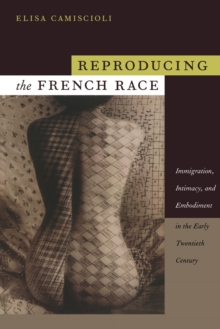 In Reproducing the French Race, Elisa Camiscioli argues that immigration was a defining feature of early-twentieth-century France, and she examines the political, cultural, and social issues implicated in public debates about immigration and national identity at the time.

Camiscioli demonstrates that mass immigration provided politicians, jurists, industrialists, racial theorists, feminists, and others with ample opportunity to explore questions of French racial belonging, France's relationship to the colonial empire and the rest of Europe, and the connections between race and national anxieties regarding depopulation and degeneration.

She also shows that discussions of the nation and its citizenry consistently returned to the body: its color and gender, its expenditure of labor power, its reproductive capacity, and its experience of desire.

Of paramount importance was the question of which kinds of bodies could assimilate into the "French race."By focusing on telling aspects of the immigration debate, Camiscioli reveals how racial hierarchies were constructed, how gender figured in their creation, and how only white Europeans were cast as assimilable.

Delving into pronatalist politics, she describes how potential immigrants were ranked according to their imagined capacity to adapt to the workplace and family life in France.

She traces the links between racialized categories and concerns about industrial skills and output, and she examines medico-hygienic texts on interracial sex, connecting those to the crusade against prostitution and the related campaign to abolish "white slavery," the alleged entrapment of (white) women for sale into prostitution abroad.

Camiscioli also explores the debate surrounding the 1927 law that first made it possible for French women who married foreigners to keep their French nationality.

She concludes by linking the Third Republic's impulse to create racial hierarchies to the emergence of the Vichy regime. 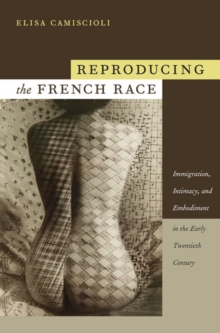