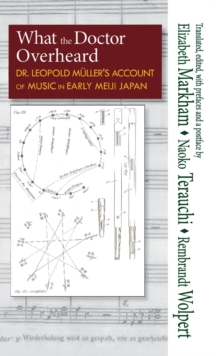 Despite their significance, the writings on Japanese music by Prussian medical scientist and physician Leopold Muller, published in Yokohama in a series from 1874 to 1876, have been nearly forgotten and marginalized even in historical research on the courtly gagaku traditions they focus upon.

This study with full translation into both English and Japanese illuminates and reassesses Muller's pioneering contribution.

It situates the essay-series historically in the light of an important line of thought about the evolution of ancient gagaku that arose only in the mid-twentieth century, as well as more widely for nearer their actual publication in relation to the emerging scientifically based 19th-century European scholarly discourse of "other" musics.

It reveals the author, founder of the Medical Academy in Tokyo and personal physician to the Meiji Emperor, as an important man of his day both in Japan and back at home. And it proposes that, with the recent rise of interest in the medical humanities and a musicological call for embracing the cognitive-scientific along with the historical and ethnographical, Mullers' first hand observations of a foreign music made from the practical body-orientated approach and ethnographic pen of a medical scientist ought also find new resonance nowadays.