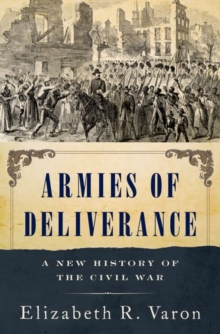 Armies of Deliverance : A New History of the Civil War Hardback

Loyal Americans marched off to war in 1861 not to conquer the South but to liberate it. In Armies of Deliverance, Elizabeth Varon offers both a sweeping narrative of the Civil War and a bold new interpretation of Union and Confederate war aims. Lincoln's Union coalition sought to deliver the South from slaveholder tyranny and deliver to it the blessings of modern civilization. Over the course of the war, supporters of black freedom built the case thatslavery was the obstacle to national reunion and that emancipation would secure military victory and benefit Northern and Southern whites alike. To sustain their morale, Northerners played up evidence of white Southern Unionism, of antislavery progress in the slaveholding border states, and of disaffectionamong Confederates. But the Union's emphasis on Southern deliverance served, ironically, not only to galvanize loyal Amer icans but also to galvanize disloyal ones. Confederates, fighting to establish an independent slaveholding republic, scorned the Northern promise of liberation and argued that the emancipation of blacks was synonymous with the subjugation of the white South. Interweaving military strategy, political decision-making, popular culture, and private reflections, Varon shows that contests over war aims took place at every level of society within the Union and Confederacy. Everyday acts on the ground-scenes of slave flight, of relief efforts to alleviate suffering, of protests against the draft, of armies plundering civilian homes, of civilian defiance of military occupation, of violence between neighbors, of communities mourning thefallen-reverberated at the highest levels of governance. In this book, major battles receive extensive treatment, providing windows into how soldiers and civilians alike coped with physical and emotional toll of the war, as it escalated into a massive humanitarian crisis. Although the Union's politics of deliverancehelped to bring military victory, such appeals ultimately failed to convince Confederates to accept peace on the victor's terms.