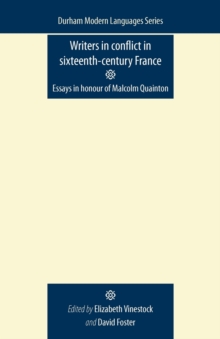 These essays written to celebrate the distinguished career of Renassiance scholar, Professor Malcolm Quainton, confirm the idea that the sixteenth-century in France was deeply marked by conflict, but readers expecting to find a volume wholly devoted to studies of war and religious disputation will be intrigued to discover that these rare not the only topics discussed.

A number of subtle analyses reveal the stresses of internal conflict experienced by writers and woven into the fabric of their compositions.

The three sections focus respectively on living and writing in conflict, the Wars of Religion, and intertextuality as conflict.

Subjects include Ronard, Baif, Du Bellay, D'Aubigne, sonnets by Mary Queen of Scots and the political role of court festivities, while a previously unknown riposte to Clement Marot is first published here. This book will appeal to scholars and students of French language, literature and culture, and sixteenth-century European history. -- .