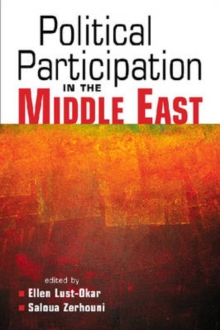 Political participation in authoritarian regimes is usually considered insignificant, or important only insofar as it promotes democracy.

Turning this common wisdom on its head, ""Political Participation in the Middle East"" demonstrates the vitality, variety, and significance of political activism across the MENA region.Through an in-depth exploration of seven countries, the authors address how formal and informal political institutions create opportunities for participation in venues as varied as trade unions, civic associations, political parties, and elections. And, without losing sight of the fact that authoritarian regimes manipulate participation to reinforce their rule, they reveal ways in which citizens do benefit - by influencing decision-making, for example, or obtaining state resources.

An engaging read for scholars and students, this work vividly illustrates how citizens matter in the politics of authoritarian regimes.It reveals the variety and significance of political participation across the Middle East and North Africa in the face of authoritarian rule.