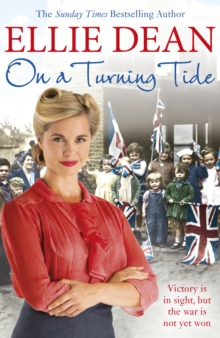 On a Turning Tide Paperback / softback

**************PRE-ORDER NOW:THE SIXTEENTH CLIFFEHAVEN NOVEL BY SUNDAY TIMES BESTSELLING AUTHOR ELLIE DEANCliffehaven, October 1944 As the Allied troops draw closer to victory, life at Beach View Boarding House is still full of uncertainty. Rosie's plans for her wedding to Ron Reilly are plagued with misunderstandings. And when Ron takes on a secret assignment just days before they are due to say their vows, it seems their plans for a future together may be doomed. Meanwhile, Peggy Reilly embraces her new managerial role at the uniform factory.

It's a welcome distraction while her husband Jim is still away fighting in the Far East.

But when an old school adversary joins the factory's ranks, Peggy must win her own battles on the home front. As a new year dawns, hopes grow brighter for the return of loved ones - but a big sea change is still to come before Victory in Europe can be declared. Victory is in sight, but the war is not yet won.