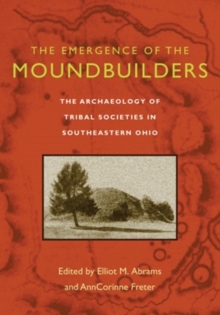 The Emergence of the Moundbuilders : The Archaeology of Tribal Societies in Southeastern Ohio Paperback / softback

Native American societies, often viewed as unchanging, in fact experienced a rich process of cultural innovation in the millennia prior to recorded history.

Drawing on the work of scholars in archaeology, anthropology, geography, geology, and botany, the collection addresses tribal society formation through such topics as the first pottery made in the valley, aggregate feasting by nomadic groups, the social context for burying their dead in earthen mounds, the formation of religious ceremonial centers, and the earliest adoption of corn. Providing the most current research on indigenous societies in the Hocking Valley, The Emergence of the Moundbuilders is distinguished by its broad, comparative overview of tribal life.