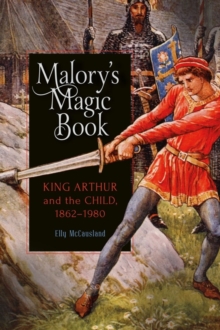 From the time when the writer J.T. Knowles first adapted Thomas Malory's Morte Darthur for a juvenile audience in 1862, there has been a strong connection between children and the Arthurian legend.

Between 1862 and 1980, numerous adaptations of the Morte were produced for a young audience in Britain and America.

They participated in cultural dialogues relating to the medieval, literary heritage, masculine development, risk, adventure and mental health through their reworking of the narrative. Covering texts by J.T. Knowles, Sidney Lanier, Howard Pyle, T.H. White, Roger Lancelyn Green, Alice Hadfield, John Steinbeck and Susan Cooper, among others, this volume explores how books for children frequently become books about children, and consequently books about the contiguity and separation of the adult and the child.

Against the backdrop of Victorian medievalism, imperialism, the rise of child psychology and two world wars, the diverse ways in which Malory's text has been altered with a child reader in mind reveals changing ideas regarding the relevance of King Arthur, and the complex relationship between authors and their imagined juvenile readers.

It reveals the profoundly fantasised figures behind literary representations of childhood, and the ways in which Malory's timeless tale, and the figure of King Arthur, have inspired and shaped these fantasies. Dr ELLY MCCAUSLAND is Senior Lecturer in British and American literature at the University of Oslo.