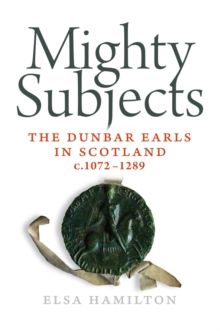 Late in the eleventh century, Gospatric, former earl of Northumbria, was granted the fortress of Dunbar and the lands in Lothian surrounding it by Malcolm III, king of Scots.

Gospatric's descendants, who came to be known as earls of Dunbar, became leading members of the Scottish aristocracy, conspicuous for their power and wealth as lords of vast estates in south-east Scotland and beyond.

Drawing on the evidence of their charters and contemporary chronicles, this book spans the careers of seven successive earls at Dunbar from the period of the Norman Conquest of England to the eve of the Scottish Wars of Independence.

It recreates and analyses the Dunbar lordship in twelfth- and thirteenth-century Scotland, exploring the landscape and the economy of the earldom, the web of human relationships within and out with the family, the tugs-of-war with the Church.

There are traces of long-vanished castles, echoes of battle and fleeting glimpses of crusade and tournament and siege.

This is a story of a great family in the evolving kingdom of the Scots, cross-border lords who gave unambiguous allegiance to the Scottish Crown, mighty subjects of successive Scottish kings.