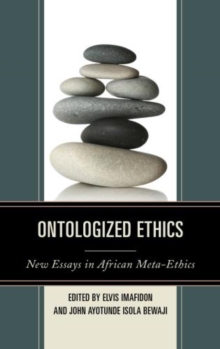 Ontologized Ethics: New Essays in African Meta-Ethics examines an often neglected meta-ethical issue in African philosophical discourse: the extent to which one's orientation of being, or idea of what-is - as an individual or as a group of persons - does, or should, determine one's concept of the good.

To what extent is ethics, or our idea of what is permissible or impermissible, grounded on ideas of what fundamentally exists or what it means to be?

The aim of this collection of essays, with emphasis on an African philosophical context, will be to establish more firmly and vigorously whether there is an intrinsic link between ontology and morality - that is, whether, and, if so, how the proper norms for human actions can be explained and validated once we make lucid ideas about metaphysical topics such as human nature, community, relationality and spirituality.

The essays included in this volume focus rigorously on ethical issues such as communalism, adultery, environmental ethics, and bioethics with the primary aim of showing whether the link between such issues and metaphysical beliefs is trivial or intrinsic.