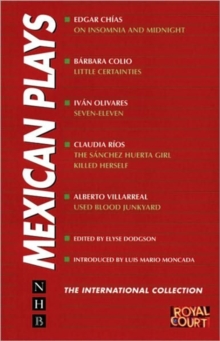 In May 2004, the Royal Court Theatre, London, began a collaboration with Teatro Helenico in Mexico City. 13 young playwrights from all parts of Mexico took part in a workshops.

As a result five new plays were presented in rehearsed readings at the Royal Court in January 2006.

Every single reading was packed out, and people queued in the cold for returns!

This volume, edited by Elyse Dodgson, the tireless Head of the Royal Court's International Dept, collects all five - in supremely stageworthy translations.

It is published alongside the premiere of the first...