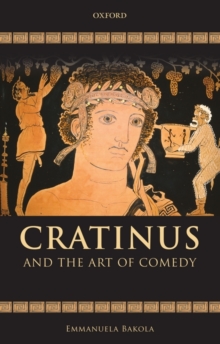 Cratinus and the Art of Comedy Hardback

Cratinus, one of the lost great poets of fifth-century Athenian comedy, had a formative influence on the comic genre, including Aristophanes himself.

Using a methodologically innovative approach, Emmanuela Bakola studies the surviving fragments of Cratinus' plays and offers a thorough analysis of the multifaceted art of this poet and his place in the history of comedy.

Issues which she addresses include the creation of a poetic personality within a performativetradition of fierce interpoetic rivalry; the play at the boundaries of the comic genre and the interaction with satyr drama and tragedy, especially Aeschylus; stagecraft and dramaturgy; comic plot-construction and characterization; the author's reflection on his immediate political, social andintellectual context.

As well as providing insight into Cratinus, her book enriches our understanding of fifth-century Athenian comedy in a dynamic evolving environment.