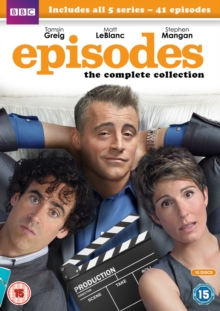 All 41 episodes from all five series of the BBC sitcom starring Matt LeBlanc, Stephen Mangan and Tamsin Greig.

Sean and Beverly Lincoln (Mangan and Greig) are a married couple who also happen to be joint writers of the hit British TV sitcom 'Lyman's Boys'.

At a London awards ceremony they are approached by an American TV executive who persuades them to relocate to Los Angeles and remake their show for an American audience - replacing their lead actor, Royal Shakespeare veteran Julian Bullard (Richard Griffiths) with 'Friends' actor Matt LeBlanc (as himself) - with predictably disastrous results.