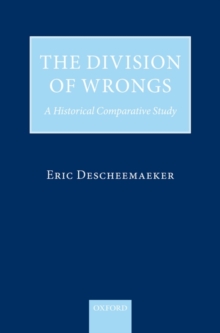 The Division of Wrongs : A Historical Comparative Study Hardback

The common law, despite procedural divisions, has only ever had one class of civil wrongs.

The civilians, by contrast, have typically split their law of wrongs in two, one group being called delicts and the other quasi-delicts.

Yet this division, which originated in Roman law, remains mysterious: it is clear neither where the line was drawn nor why a separation was made along this line. This book does two things. In the first two parts, it investigates the origins of the division and its development in a modern civilian jurisdiction, France.

What is argued for is that the Roman dichotomy was originally one between fault (culpa)-based and situational liability, which was prompted by a historical contraction of the Roman concept of a wrong (delictum).

French law, building on medieval interpretations of the division, redrew the line one level higher, between deliberate andnegligent wrongdoing.

By doing so, it involved itself in severe taxonomical difficulties, which the book explores. The third part of the work concerns itself with the significance of the civilian division of wrongs according to degrees of blameworthiness (dolus, culpa, casus) for the common law.

A provocative thesis is developed, in effect, that there is a strong case for the adoption of a similar trichotomy as the first-level division of the English law of civil wrongs.

From its formulary age, English law has inherited an unstable taxonomy where wrongs intersect.

The existence of these mismatchedcategories continues to cause significant difficulties, which a realignment of causes of action along the above lines could rectify.