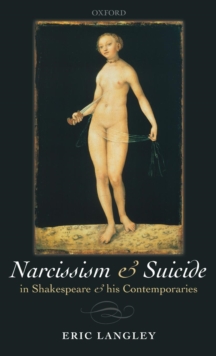 Narcissism and Suicide in Shakespeare and his Contemporaries Hardback

The subjects of this book are the subjects whose subjects are themselves. Narcissus so himself himself forsook,And died to kiss his shadow in the brook. In accusing the introspective Adonis of narcissistic self-absorption, Shakespeare's Venus employs a geminative construction - 'himself himself' - that provides a keynote for this study of Renaissance reflexive subjectivity.

Through close analysis of a number of Shakespearean texts - including Venus and Adonis, Romeo and Juliet, Julius Caesar, Hamlet, and Othello - his book illustrates how radical self-reflection is expressed on the Renaissance pageand stage, and how representations of the two seemingly extreme figures of the narcissist and self-slaughterer are indicative of early-modern attitudes to introspection.

Encompassing a broad range of philosophical, theological, poetic, and dramatic texts, this study examines period descriptions of the early-modern subject characterised by therhetoric of reciprocation and reflection.

The narcissist and the self-slaughter provide models of dialogic but self-destructive identity where private interiority is articulated in terms of self-response, but where this geminative isolation is understood as self-defeating, both selfish and suicidal.

The study includes work on Renaissance revisions of Ovid, classical attitudes to suicide, the rhetoric of friendship literature, discussion of early-modern optic theory, and an extended discussionof narcissism in the epyllia tradition.

Sustained textual analysis offers new readings of major Shakespearean texts, allowing familiar works of literature to be seen from the unusual and anti-social perspectives of their narcissistic and suicidal protagonists.