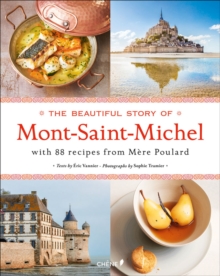 The Beautiful Story of Mont-Saint-Michel : With 88 Recipes From Mere Poulard Hardback

For the 130th anniversary of La Mere Poulard, discover the incredible character of this leading figure in French cuisine.

La Mere Poulard has managed to promote a cuisine that is genuine and truly reflects the land, as well as this centre of tourism and pilgrimage: Mont Saint-Michel!

The bay, the abbey, the village... these are symbols of the French heritage that attracts more than 2.5 million tourists each year.

As well as its history, this book reveals some of the secrets of La Mere Poulard, especially through its 88 recipes including: Mere Poulard's fresh, ten-egg omelettes with shellfish from the bay, grilled sardines, white butter sauce with fresh ginger, little cream pots, and a pudding based on French toast with caramelised apples.

A wonderful homage to a gourmet cuisine that perfectly symbolises Mont Saint-Michel.