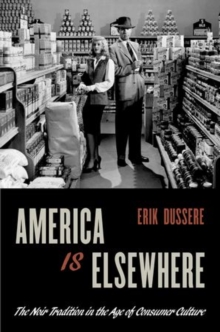 America Is Elsewhere : The Noir Tradition in the Age of Consumer Culture Paperback / softback

America is Elsewhere provides a rigorous and creative reconsideration of hard-boiled crime fiction and the film noir tradition within three related postwar contexts: 1) the rise of the consumer republic in the United States after World War II 2) the challenge to traditional notions of masculinity posed by a new form of citizenship based in consumption, and 3) the simultaneous creation of "authenticity effects" - representational strategies designed tosafeguard an image of both the American male and America itself outside of and in opposition to the increasingly omnipresent marketplace.

Films like Double Indemnity, Ace in the Hole, and Kiss Me Deadly alongside novels by Dashiel Hammett and Raymond Chandler provide rich examples for the first half of the study. The second is largely devoted to works less commonly understood in relation to the hard-boiled and noir canon.

Examinations of the conspiracy films from the Seventies and Eighties-like Klute and The Parallax View-novels by Thomas Pynchon, Chester Himes and William Gibson reveal the persistence and evolution of these authenticity effects across the second half of the American twentieth century.