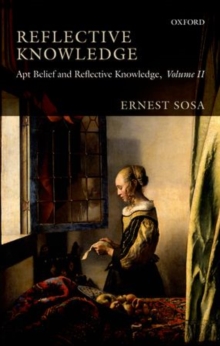 Along the way various lines of objection are explored. In Part I Sosa considers historical alternatives to the view developed in Part II.

He begins with G.E. Moore's legendary proof, and the epistemology that lies behind it.

That leads to classical foundationalism, a more general position encompassing the indirect realism advocated by Moore.

Next he turns to the quietist naturalism found in David Hume, Ludwig Wittgenstein, and P.F.

A quite different option is the subtle and complexepistemology developed by Wilfrid Sellars over the course of a long career.

Finally, Part I concludes with a study of Donald Davidson's distinctive form of epistemology naturalized (as Sosa argues).

The second part of the book presents an alternative beyond the historical positions of Part I, one that defends a virtue epistemology combined with epistemic circularity.

This alternative retains elements of the earlier approaches, while discarding what was found wanting in them.