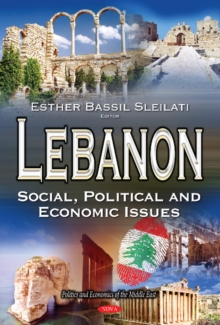 This book sheds light on diverse aspects of a country thus far renowned for its various forms of instability and turmoil by portraying it from very different angles. It begins by underscoring how the instructors emotional intelligence is paramount for maintaining student satisfaction and retention in a market as competitive as that of Lebanon. It then recognises the impact of social pressure on e-Book adoption in Lebanon and investigates the challenges and opportunities of attaining such goals through the instigation of e-government technology in a developing country. It then delves into female entrepreneurial motivations by inspecting the influence of age, which is a neglected facet of entrepreneurship research. Its main motivation is the salience of underrepresentation of women in entrepreneurial ranks even in the most developed markets, although the number of female entrepreneurs in Lebanon is surprising. After that, it points to two approaches for examining leadership, the first focusing on the leader as an individual while contemplating the qualities and capabilities of leaders, whereas the other contests that an individual leader initiates a general understanding of leadership by assuming that leadership is the technique used by this individual and not his/her position. Always retaining the HR spirit, this book studies the connection between investment in talent retention practices in Lebanese organisations and the line managers accountability of affective commitment. The interest mainly lies in the fact that Lebanon symbolises an interesting economic and cultural context from which talent has been depleted, resulting in a greater need to instigate talent retention practices to preserve and retain this talent. It then moves to exploring the impact of coaching on employee commitment and learning, and afterwards evaluates its influence on performance in the Lebanese banking sector. One way of improving performance among firms is to actively utilise their tacit knowledge capital. So, it critically examines tacit knowledge and effectuation to reveal if the interaction can lead to favorable outcomes in a firms innovative capability. Another way to gain a competitive advantage is for organisations to care for their customers by educating them to secure adequate decision making, thus leading to the study of the impact of consumer education on financial consumer protection, as well as looking into the controversial relationship between corporate reputation and customer satisfaction, and the mediating role of perceived service quality. It then identifies the effect of a business model design on customer satisfaction, which singles out corporate performance in the high-tech channel innovation framework, and proves the effect of information systems by helping healthcare employees while performing their daily tasks, especially after the increase of their work load with the influx of Syrian refugees to Lebanon. It then concludes by investigating the trends and indicators related to national output, inflation, unemployment, national debt, exchange rates, balance of payments, poverty and human development. In sum, this book proves that Lebanon is moving away from the stereotypical image it once had and towards a country much like the one that Lebanese people have been dreaming of restoring.