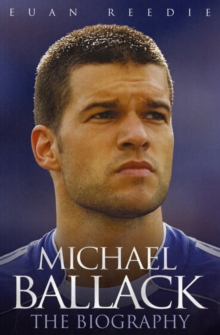 Equally competent with both his right and left feet, Ballack began his career with BSG Motor aged just seven.

On signing his first professional contract with Chemnitzer FC, he earned the nickname 'Little Kaiser' and soon moved on to Kaiserslautern.

A three-time winner of the German player of the year award, Ballack's three seasons at Bayer Leverkusen and four at Bayern Munich cemented his reputation as the attacking midfielder with an eye for a goal.

But his journey from East German wunderkind to one of European football's most versatile players and a Stamford Bridge linchpin has been far from easy, with a suspension from the 2002 World Cup Final; losing the 2006 semi-final in the last minutes of extra time; and the ankle injury that kept him out of Chelsea's Champions League bid in his debut season.Sports journalist and football reporter Euan Reedie provides a fascinating insight into Ballack's return to form with this definitive story of one of Europe's most talented and entertaining footballers.