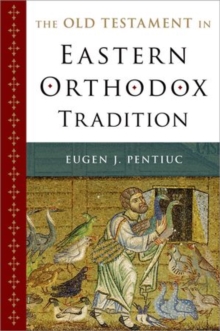 This book offers the first comprehensive examination and analysis of the receipt, transmission, and interpretation of the Old Testament in the Eastern Orthodox tradition.

In Orthodoxy, the Old Testament has commonly been equated with the Septuagint, the Greek version of the Jewish Bible attested by fourth- and fifth-century Christian manuscripts.

As Eugen Pentiuc shows throughout this work, however, the Eastern Orthodox Church has never closed the door to othertext-witnesses or suppressed interpreters' efforts to dig into the less familiar text of the Hebrew Bible for key terms or reading variants.

The first part of the book examines the reception of the Old Testament by the early Eastern Orthodox Church, considering such matters as the nature of divine revelation, the paradox of the inclusion of the Jewish scriptures in the Christian Bible, and the relationship between the Old and New Testaments.

Pentiuc's investigation is not limited to the historic-literary sources but extends to the visual, imaginative, and symbolic aspects of the Church's living tradition.

In the second part of thebook he looks at the various ways Orthodox Christians have sought to assimilate the Old Testament in the spiritual, liturgical, and doctrinal fabric of their faith community.

Special attention is given to liturgy (hymnody, lectionaries, and liturgical symbolism), iconography (frescoes, icons,illuminations), monastic rules and canons, conciliar resolutions, and patristic works in Greek, Syriac and Coptic. This wide-ranging and accessible work will serve not only to make Orthodox Christians aware of the importance of the Old Testament in their own tradition, but to introduce those who are not Orthodox both to the distinctive ways in which that community approaches scripture and to the modes of spiritual practice characteristic of Eastern Orthodoxy.