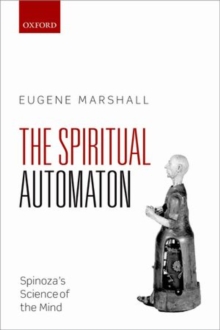 The Spiritual Automaton : Spinoza's Science of the Mind Hardback

Eugene Marshall presents an original, systematic account of Spinoza's philosophy of mind, in which the mind is presented as an affective mechanism, one that, when rational, behaves as a spiritual automaton.

The central feature of the account is a novel concept of consciousness, one that identifies consciousness with affectivity, a property of an idea paradigmatically but not exhaustively instantiated by those modes of thought Spinoza calls affects. Inadequate andadequate ideas come to consciousness, and thus impact our well-being and establish or disturb our happiness, only insofar as they become affects and, thus, conscious. And ideas become affects by entering into appropriate causal relations with the other ideas that constitute a mind.

Furthermore, thetopic of consciousness in Spinoza provides an eminently well-placed point of entry into his system, because it flows directly out of his central metaphysical, epistemological, and psychological commitments-and it does so in a way that allows us to see Spinoza's philosophy as a systematic whole.

Further, doing so provides a thoroughly consistent yet novel way of thinking about central themes in his thought.

Marshall's reading provides a novel understanding of adequacy, innateness, power,activity and passivity, the affects, the conatus, bondage, freedom, the illusion of free will, akrasia, blessedness, salvation, and the eternity of the soul.

In short, by explaining the affective mechanisms of consciousness in Spinoza, The Spiritual Automaton illuminates Spinoza's systematic philosophicaland ethical project as a whole, as well as in its details, in a striking new way.