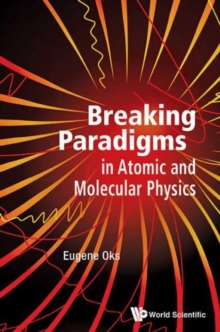 The book presents the following counterintuitive theoretical results breaking several paradigms of quantum mechanics and providing alternative interpretations of some important phenomena in atomic and molecular physics. 1) Singular solutions of the Schroedinger and Dirac equations should not have been always rejected: they can explain the experimental high-energy tail of the linear momentum distribution in the ground state of hydrogenic atoms.

Application: a unique way to test intimate details of the nuclear structure by performing atomic (rather than nuclear) experiments and calculations. 2) Charge exchange is not really an inherently quantal phenomenon, but rather has classical roots.

Application: continuum lowering in plasmas. 3) The most challenging problem of classical physics that led to the development of quantum mechanics - the failure to explain the stability of atoms - can be solved within a classical formalism that has its roots in Dirac's works.

The underlying physics can be interpreted as a non-Einsteinian time dilation. 4) In two-electron atoms/ions, the spin-spin interaction (singular in its nature), usually considered unimportant, makes a significant contribution to the binding energy. 5) In magnetized plasmas the standard Inglis-Teller concept, concerning the number of observed lines in spectral series of hydrogen, breaks down.

Application: new plasma diagnostic. 6) Extrema in transition energies of molecules/quasimiolecules can result in dips (rather than usually considered satellites) within spectral lines.

Application: the experimental determination of rates of charge exchange between multicharged ions - important for magnetic fusion in Tokamaks, for population inversion in the soft x-ray and VUV ranges, for ion storage devices, and for astrophysics.