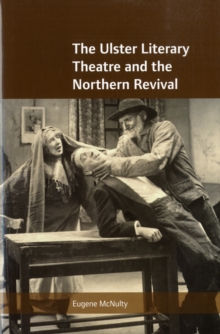 The Ulster Literary Theatre and the Northern Revival Hardback

The Ulster Literary Theatre was considered by many contemporaries to be the equal of the Abbey Theatre, certainly in terms of energy, output and nationalist commitment.

In the first decade of its existence, this Belfast company produced a number of significant and exciting works, including the early efforts of Rutherford Mayne and the extraordinary burlesques of Gerald MacNamara.

In so doing, it provided a key forum in which Ulster's cultural politics could be explored and performed.

Drawing particularly on the northern group's early history, Eugene McNulty explores this intriguing performance history of Belfast's own nationalist theatre.In the course of this study a number of key issues are re-examined: the Ulster Literary Theatre's relationship with the Abbey Theatre; Ulster's role in the Irish Literary Revival; the interaction between northern cultural nationalism and an evolving Ulster Unionist politics.

In all of this, McNulty argues for a reassessment of the politics of the Revival, and insists upon the importance of a 'northern revival' and its significance for a fuller understanding of this crucial period in Irish history.