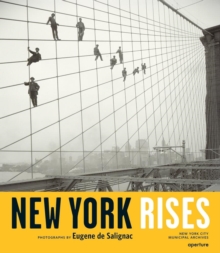 As sole photographer at the Department of Bridges/Plant and Structures during that period of dizzying growth, he documented the creation of the city's modern infrastructure bridges, major municipal buildings, roads, and subways.

For years, these remarkably lyrical photographs have been used in books and films, but never credited to de Salignac. "New York Rises" is the first monograph to present them as an aesthetically coherent oeuvre by a photographer with a unique vision.

As meticulous in his record keeping as he was creative in his photography, de Salignac left five handwritten logs that identify each negative by place and exact date.

This information is complemented throughout the book by narrative captions expanding on themes such as accidents, bridges, workers, and the Depression.

Kevin Moore explores his work in the context of other photographers of the period, including Eugene Atget and Berenice Abbott.