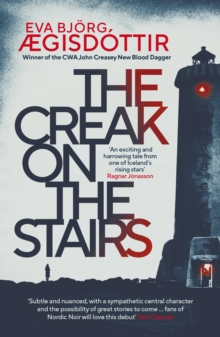 The Creak on the Stairs EPUB

When a woman's body is discovered at a lighthouse in the Icelandic town of Akranes, investigators discover shocking secrets in her past. First in the disturbing, chillingly atmospheric, addictive new Forbidden Iceland series.

'Fans of Nordic Noir will love this moving debut from Icelander Eva Bjork Aegisdottir. It's subtle, nuanced, with a sympathetic central character and the possibilities of great stories to come' Ann Cleeves

When a body of a woman is discovered at a lighthouse in the Icelandic town of Akranes, it soon becomes clear that she's no stranger to the area.

Chief Investigating Officer Elma, who has returned to Akranes following a failed relationship, and her collegues Saevar and HorÃ°ur, commence an uneasy investigation, which uncovers a shocking secret in the dead woman's past that continues to reverberate in the present day ...

But as Elma and her team make a series of discoveries, they bring to light a host of long-hidden crimes that shake the entire community. Sifting through the rubble of the townspeople's shattered memories, they have to dodge increasingly serious threats, and find justice ... before it's too late.