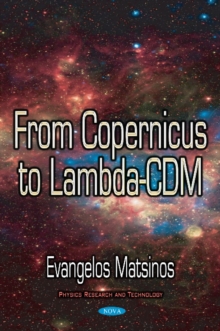 From Copernicus to Lambda-CDM Hardback

The importance of gravitational interaction in the evolution of the Universe as a whole, as well as of the various structures it contains, is paramount and multi-faceted.

Despite the fact that electromagnetic phenomena are also involved in our daily activities and that our environment is warmed up by the nuclear interaction to representative temperatures exceeding the average temperature of the Universe by a factor of about 100, the Universe (as far as the spatial distribution of its large-scale structures is concerned) is shaped by gravitational interaction.

To start with, the attractive nature of gravitational interaction enables matter to form molecular clouds, and molecular clouds to form protostars (ie: objects which are held together by their own gravity).

Some of these objects are massive enough to squeeze themselves to the level of igniting thermonuclear fusion, transforming the hydrogen in their cores into helium, and thus becoming stars, as was the case with the sun billions of years ago.

The gravitational interaction will squeeze some stars to the level of igniting helium and producing higher elements, which is the only way such elements can be formed in the universe.

The most massive of these objects will undergo a spectacular phase, experiencing an intolerable pressure imbalance when their cores reach high concentrations of iron.

The gravitational interaction will force the core of such stars to collapse.

The collapse will trigger a rebounding effect, blasting the outer layers of the star and spewing the elements of life into space.

The Earth itself and everything on its surface, be they animate and inanimate beings, are products of a stunning recycling process, remnants of supernova explosions.

Gravitational interaction holds together the objects in the solar system.

It keeps the Earth at a reasonable distance from the sun and in an orbit which is almost circular, thus restraining the temperature variation on its surface to acceptable levels.

It keeps the moon in a stable orbit around the Earth, stabilising the Earth's rotation on its axis and preventing wobbling, thus enabling convenient conditions for life.

This book is about the evolution of the ideas involving gravitational interaction, from the planetary-motion problem and Newtons Inverse-Square Law to the introduction of Einsteins General Theory of Relativity, to the latest results obtained from the missions investigating the anisotropy in the cosmic microwave background radiation, and to the implications of these results for the future of the universe.

The existing literature on these subjects is either too mathematical or failing to provide the mathematical details.

This book treads the midline and aims at providing both aspects.

The novel part in this book is the path it treads in time over a period of about five centuries (i.e., from Copernicus to the latest results of the COBE, WMAP and Planck missions), in the size of the gravitating objects (from the level of a typical star to that of the entire universe) and in the magnitude of the gravitational effects (from the standard Newtonian weak-field approximation to Einsteins General Theory of Relativity).