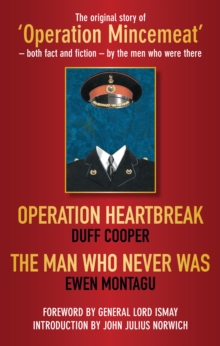 Operation Heartbreak and The Man Who Never Was : The Original Story of 'Operation Mincemeat' - Both Fact and Fiction - by the Men Who Were There Paperback / softback

The greatest deception of the Second World War - and possibly in the whole of military history - took place in April 1943 when a body was found floating in the sea off the Spanish coast.

The documents found on him would eventually find their way to Hitler's desk and send German troops hurtling in the wrong direction.

The dead man convinced the Axis powers that the Allies were about to attack Greece and not the real target, Sicily.

The course of the war was changed. In this volume is a story within the original extraordinary story.

Duff Cooper's only fictional work, Operation Heartbreak, was based upon the emotionally charged decision to use an anonymous corpse to weave the web of deceit.

The British authorities tried to suppress the book because it would show the Spanish in a bad light, with Franco now in power.

A change of heart followed and Ewen Montagu was encouraged to tell the whole story.

Anyone who read Ben Macintyre's best-selling Operation Mincemeat will have to read this double volume to understand the full story.