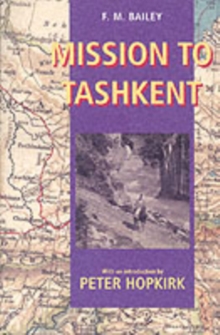 'one of the best books about secret intelligence work ever written' Peter Hopkirk. Colonel F. M. Bailey, whose extraordinary adventures are told here, was long accused by Moscow of being a British master-spy sent in 1918 to overthrow the Bolsheviks in Central Asia.

As a result, he enjoyed many years after his death an almost legendary reputation there - that of half-hero, half-villain. In this remarkable book he tells of the perilous game of cat-and-mouse, lasting sixteen months, which he played with the Bolshevik secret police, the dreaded Cheka.

At one point, using a false identity, he actually joined the ranks of the latter, who unsuspectingly sent him to Bokhara to arrest himself. Told with almost breathtaking understatement, Bailey's narrative - set in a region once more back in the headlines - reads like vintage Buchan.