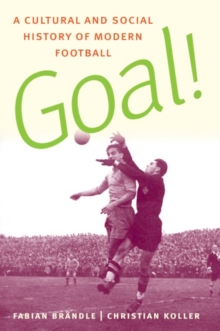 Goal! covers the history of the beautiful game from its origins in English public schools in the early 19th century to its current role as a crucial element of a globalized entertainment industry.

The authors explain how football transformed from a sport at elite boarding schools in England to become a pastime popular with the working classes, enabling factories such as the Thames Iron Works and the Woolwich Arsenal to give birth to the teams that would become the Premier League mainstays known as West Ham United and Arsenal.

They also explore how the age of amateur soccer ended and, with the advent of professionalism, how football became a sport dominated by big clubs with big money and with an international audience. There are intense rivalries in soccer, such as that in Glasgow, Scotland, between (Catholic) Celtic and (Protestant) Rangers, and the authors examine closely the social causes that make for such passionate fans.

The book also discusses the use of soccer for political purposes, such as in Hitler's Germany and Franco's Spain. And - given the long-standing association of soccer as a man's sport and the rise of women's soccer, especially in the United States - the authors look at the gendered history of the world's most popular sport.

This book, which will appeal to all connoisseurs of soccer, provides a lens through which to view the social and cultural history of modern Europe.