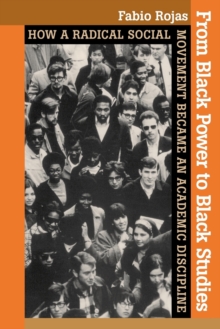 As an influential political force, this movement in turn spawned the academic discipline known as Black Studies.

Today there are more than a hundred Black Studies degree programs in the United States, many of them located in America's elite research institutions.

In From Black Power to Black Studies, Fabio Rojas explores how this radical social movement evolved into a recognized academic discipline. Rojas traces the evolution of Black Studies over more than three decades, beginning with its origins in black nationalist politics.

His account includes the 1968 Third World Strike at San Francisco State College, the Ford Foundation's attempts to shape the field, and a description of Black Studies programs at various American universities.

His statistical analyses of protest data illuminate how violent and nonviolent protests influenced the establishment of Black Studies programs.