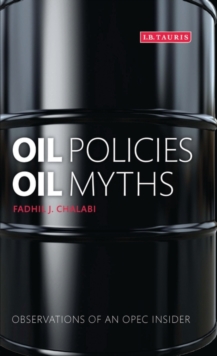 The Organisation of Petroleum Exporting Countries, commonly known as OPEC, has been a notoriously opaque and mysterious organization.

In this book, Fadil J. Chalabi, an insider who spent many years at the heart of the organization as Iraq's permanent undersecretary for oil, invites us to discover the intrigue and arguments that have shaped OPEC policy since its inception in 1960.

The author interweaves his analysis with first-hand experiences that give authenticity to momentous events, including the infamous 1975 Vienna hostage-taking when Carlos the Jackal kidnapped a number of OPEC ministers, including the author.

From the time of Egypt under Nasser, Gaddafi's Libya, Saddam's Iraq and Khomeini's Iranian revolution, Chalabi uses his unique position and his unparallelled insider knowledge to illuminate an organization that has, at times, been accused of fomenting economic turmoil, political unrest and even military action. Benefiting from the perspective of an insider who understands the inner workings of OPEC and its dramatic impact on world politics and economics, this book is an essential read for those who wish to look beyond the myths of this highly influential and at times controversial organization.