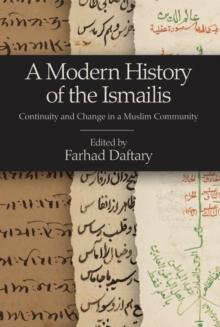 A Modern History of the Ismailis : Continuity and Change in a Muslim Community Hardback

The Ismailis have enjoyed a long, eventful and complex history dating back to the 8th century CE and originating in the Shi'i tradition of Islam.

During the medieval period, Ismailis of different regions - especially in central Asia, south Asia, Iran and Syria - developed and elaborated their own distinctive literary and intellectual traditions, which have made an outstanding contribution to the culture of Islam as a whole.

At the same time, the Ismailis in the Middle Ages split into two main groups who followed different spiritual leaders.

The bulk of the Ismailis came to have a line of imams now represented by the Aga Khans, while a smaller group - known in south Asia as the Bohras - developed their own type of leadership.This collection is the first scholarly attempt to survey the modern history of both Ismaili groupings since the middle of the 19th century.

It covers a variety of topical issues and themes, such as the modernising policies of the Aga Khans, and also includes original studies of regional developments in Ismaili communities worldwide. The contributors focus too on how the Ismailis as a religious community have responded to the twin challenges of modernity and emigration to the West. "A Modern History of the Ismailis" will be welcomed as the most complete assessment yet published of the recent trajectory of this fascinating and influential Shi'i community.