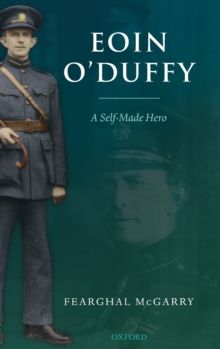 Eoin O'Duffy was one of the most controversial figures of modern Irish history.

A guerrilla leader and protege of Michael Collins, he rose rapidly through the ranks of the republican movement.

By 1922 he was chief of staff of the IRA, a member of the Irish Republican Brotherhood's Supreme Council, and a Sinn Fein deputy in Dail Eireann.

As chief of police, O'Duffy was the strongest defender of the Irish Free State only to become, after hisemergence as leader of the Blueshirt movement in 1933, the greatest threat to its survival.

Increasingly drawn to international fascism, he founded Ireland's first fascist party, and led an Irish Brigade to fight under General Franco in the Spanish Civil War.

He died in wartime Dublin, a Nazi collaborator, and a broken man. This study, the first ever biography of Eoin O'Duffy, draws on unpublished archival and personal papers to trace his journey from revolutionary republicanism to fascism.

It examines the importance of cultural forces, including the legacy of the Irish-Ireland movement, Catholicism, anti-communism, and O'Duffy's ideas on sports, morality, and masculinity to explain his descent into extremism.

McGarry peels away the public persona to reveal a complex picture of the motives which drove thisextraordinary career.

A crusading moralist and advocate of teetotalism, obsessed with the need to counter public immorality, who was at the same time a closet homosexual and alcoholic, O'Duffy's remarkable life was characterised by self-aggrandisement, fantasy, and contradiction.

This fascinating biography explores themes as diverse as cultural nationalism, violence, sectarianism, militarism, and masculinity to shed new light on Irish republicanism and the politics of interwar European fascist movements.

It is essential reading for anyone seeking to understand the complexities of culture, politics, and society in interwar Ireland.