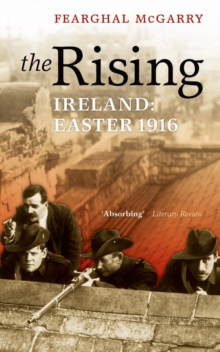 The Easter Rising of 1916 not only destroyed much of the centre of Dublin - it changed the course of Irish history.

But how did it achieve this? What role did people from ordinary backgrounds play in the making of the Irish revolution and what motivated them to take part in it?

What did the rebels think they could achieve? And what kind of a republic were they fighting for? These basic questions continue to divide historians of modern Ireland.

The Rising is the story of Easter 1916 from the perspective of those who made it, focusing on the experiences of rank and file revolutionaries - a story now told for the first time.

To do this, Fearghal McGarry makes use of a unique source that has only recently seen the light of day - a collection of over 1,700 eye-witness statements detailing the activities of members of Sinn Fein, the Irish Republican Brotherhood, Cumann na mBan, and the Irish Volunteers at the time of theRising.

This collection represents one of the richest and most comprehensive oral history archives devoted to any modern revolution, providing new insights on almost every aspect of this seminal period.

Using this unique source, McGarry shows how people from ordinary backgrounds became politicized and involved in the struggle for Irish independence in the early years of the twentieth century.

He illuminates their motives and aspirations and highlights the importance of the Great War as a catalyst for the uprising.

He concludes by exploring the Rising's revolutionary aftermath, which saw the creation of an Irish parliament, Dail Eireann, and the Irish Republican Army's armed campaignto win independence.