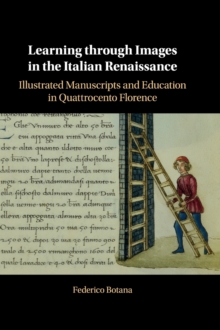 Learning through Images in the Italian Renaissance : Illustrated Manuscripts and Education in Quattrocento Florence Hardback

For the affluent merchant class of fifteenth-century Florence, the education of future generations was a fundamental matter.

Together with texts, images played an important role in the development of the young into adult citizens.

In this book, Federico Botana demonstrates how illustrated manuscripts of vernacular texts read by the Florentine youth facilitated understanding and memorisation of basic principles and knowledge.

They were an important means of acquiring skills then considered necessary to gain the respect of others, to prosper as merchants, and to participate in civic life.

Botana focuses on illustrated texts that were widely read in Quattrocento Florence: the Fior di virtu (a moral treatise including a bestiary), the Esopo volgarizzato (Aesop's Fables in Tuscan), the Sfera by Goro Dati (a poem on cosmology and geography), and mathematical manuals known as libri d'abbaco.

He elucidates, in light of original sources and medieval and modern cognitive theory, the mechanisms that empowered illustrations to transmit knowledge in the Italian Renaissance.