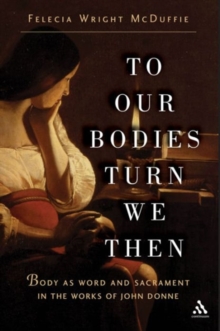 To Our Bodies Turn We Then : Body as Word and Sacrament in the Works of John Donne Paperback / softback

In this study, McDuffie offers a comprehensive interpretation of Donne's reading of the body.

In Donne's imaginative universe, the human person lies at the centre of the great interconnected web of God's signs and acts.

As such, he makes it the touchstone of his own theology.

While his anthropology is basically orthodox, the emphasis Donne places on the body and the role it plays in his religious poetics are distinctive.

Refusing to restrict God's revelation to the written words of Scripture, Donne turns habitually to the book of the human body as a collection of signs that indicate God's nature, his intent, and the human condition.

He also, at times, represents the human body not as a 'mere' sign but as sacrament: a seal of the promises of God that conveys his presence and grace.