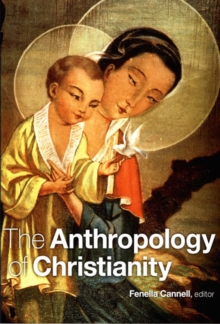 The Anthropology of Christianity Paperback / softback

This collection provides vivid ethnographic explorations of particular, local Christianities as they are experienced by different groups around the world.

At the same time, the contributors, all anthropologists, rethink the vexed relationship between anthropology and Christianity.

As Fenella Cannell contends in her powerful introduction, Christianity is the critical "repressed" of anthropology.

To a great extent, anthropology first defined itself as a rational, empirically based enterprise quite different from theology.

The theology it repudiated was, for the most part, Christian.

Cannell asserts that anthropological theory carries within it ideas profoundly shaped by this rejection. Because of this, anthropology has been less successful in considering Christianity as an ethnographic object than it has in considering other religions.

This collection is designed to advance a more subtle and less self-limiting anthropological study of Christianity.The contributors examine the contours of Christianity among diverse groups: Catholics in India, the Philippines, and Bolivia, and Seventh-Day Adventists in Madagascar; the Swedish branch of Word of Life, a charismatic church based in the United States; and Protestants in Amazonia, Melanesia, and Indonesia.

Highlighting the wide variation in what it means to be Christian, the contributors reveal vastly different understandings and valuations of conversion, orthodoxy, Scripture, the inspired word, ritual, gifts, and the concept of heaven.

In the process they bring to light how local Christian practices and beliefs are affected by encounters with colonialism and modernity, by the opposition between Catholicism and Protestantism, and by the proximity of other religions and belief systems.

Together the contributors show that it not sufficient for anthropologists to assume that they know in advance what the Christian experience is; each local variation must be encountered on its own terms. Contributors. Cecilia Busby, Fenella Cannell, Simon Coleman, Peter Gow, Olivia Harris, Webb Keane, Eva Keller, David Mosse, Danilyn Rutherford, Christina Toren, Harvey Whitehouse