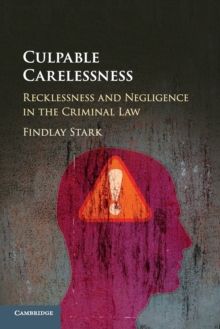 by Findlay (University of Cambridge) Stark

The question of when a person is culpable for taking an unjustified risk of harm has long been controversial in Anglo-American criminal law doctrine and theory.

This survey of the approaches adopted in England and Wales, Canada, Australia, the United States, New Zealand and Scotland argues that they are converging, to differing extents, around a 'Standard Account' of culpable unjustified risk-taking.

With reference to criminal law theory and philosophical literature, the author argues that, when explained appropriately, the Standard Account is defensible and practical.

Defending the Standard Account involves analysing in depth a number of controversial matters, including the meaning of advertence/awareness, the role of attitudes such as indifference in culpable risk-taking, and the question of whether negligence should be used in the criminal law.