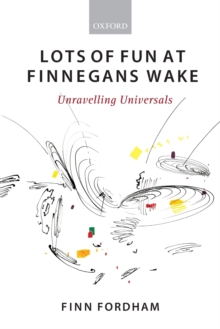 This book is a critical introduction to Finnegans Wake and its genesis. As well as offering a survey of critical, scholarly and theoretical approaches to Joyce's masterpiece, it analyses in detail the compositional development of certain key passages which describe the artist (Shem) and his project; the river-mother (ALP) and her 'first kiss'; the Oedipal shooting of the universal father (HCE) by the priestly son (Shaun); and the bewitching and curiousdaughter (Issy).

The analyses demonstrate 'genetic' ways of reading the text which illustrate its immense range and playfulness and how these qualities were generated in composition.

As well as opening up the densely detailed textuality of the Wake in all its multiplicity, Fordham argues for a relation between the way the text was formed and key aspects of its thematic content: an uprising of particularity and detail against universality, absolutes and generality.

The proliferation of individuated textual details overwhelm any unitary concept to the text. And this reflects an idealised and utopian uprising as it overcomes centralising singularity: Finnegans do wakeup. As part of this argument a qualified return to a notion of character is proposed. But it is qualified in that characters can be understood in part as reflecting the character of compositional techniques: self-criticism and concealment, expansion and growth, flow and reflection, transferral andtransformation.

The character of the text's composition as a whole can be, paradoxically, summed up in the force of individuated multitudes: in the people, both male and female, young and old, combining to overwhelm syntactic uniformity and singular signification.