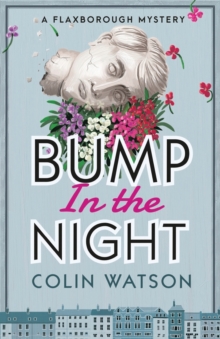 Mr Watson wields a delightfully witty pen dripped in acid." - Daily Telegraph Tuesday nights have suddenly turned quite ridiculously noisy in the country town of Chalmsbury, where the good folk are outraged at having their rest disturbed. It begins with a drinking fountain being blown to smithereens next the statue of a local worthy loses his head, and the following week a giant glass eye is exploded.

Despite the soft-soled sleuthing of cub reporter Len Leaper, the crime spate grows alarming. Sheer vandalism is bad enough, but when a life is lost the amiable Inspector Purbright, called in from nearby Flaxborough to assist in enquiries, finds he must delve deep into the seamier side of this quiet town's goings on. Witty and a little wicked, Colin Watson's tales offer a mordantly entertaining cast of characters and laugh-out-loud wordplay. AUTHOR: Colin Watson was born in 1920 in Croydon in south London.