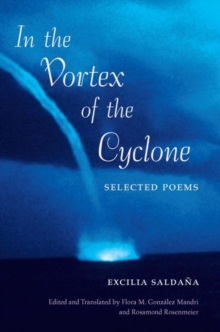 In the Vortex of the Cyclone : Selected Poems by Excilia Saldana Paperback / softback

Before her death in 1999, most of her work had appeared in Spanish exclusively in Cuba with only scattered translations.

This collection emphasizes her construction of a personal and poetic autobiography to reveal the identity of one of the best Afro-Caribbean poets of the twentieth century.