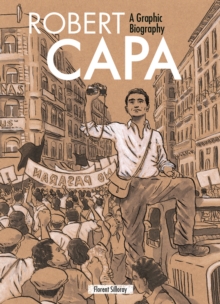 'If your pictures aren't good enough, you aren't close enough.' - Robert Capa. 'Robert Capa: A Graphic Biography' is a brilliant portrayal of the career of the great war photographer who, at the time of his death in 1954, had only one wish: to be an unemployed war photographer. 'It is not always easy' he said, 'to stand aside and be unable to do anything except record the suffering.' Born in 1913 to a Jewish family in Budapest, Endre Friedmann left home at 18 for Germany where he studied journalism and political science and worked in a photo agency darkroom.

In 1933, Friedmann went to Paris where he shared a darkroom with Henri Cartier-Bresson and lived with Gerda Taro, also a photographer.

Together they contrived the name and image 'Robert Capa, famous American photographer'.

Capa made several trips to document the Spanish Civil War, where he took the seminal image, 'Death of a Loyalist Soldier' for which he was heralded as 'the greatest war photographer in the world'.

By the start of World War II, Capa was in New York freelancing for LIFE, Time, and other publications.

He went abroad with the US army to record Allied involvement in WWII, including D-Day on Omaha beach. Disembarking from a landing boat, he took the only images of the invasion.

He went on to cover the war in Leipzig, Nuremberg, Berlin, London and Paris.

Even now, it is the D-Day images that marked him as the world's greatest war photographer. 'Robert Capa: A Graphic Biography', written in the first person, follows his personal and professional life and through his eyes, the social upheaval and earth-shattering wars of the 20th century.

It shows his intimate life and his relationships with the day's larger-than-life personalities: Ingrid Bergman, John Steinbeck, Ernest Hemingway, Pablo Picasso and many others.

Sepia watercolours wash the book in the fog of war and recall Capa's generation on the cusp of colour film.

They show his professional work, his personal battles, his victories and struggles, and his legacy: the founding of the Magnum, a cooperative photo agency which gives photographers control of their work.

In 1954, having sworn off war photography but in need of money, he left to cover his fifth war, in Indochina. Driven by his conviction that 'if your pictures aren't good enough, you're not close enough,' he was with a French patrol when he stepped on a landmine and was killed, camera in hand.