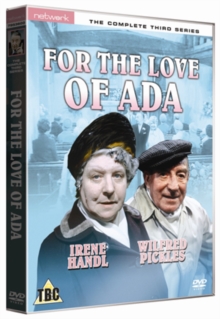 For the Love of Ada: The Complete Third Series DVD

All seven episodes from the third series of the early 1970s sitcom about the trials and tribulations faced by a newly married elderly couple.

Walter (Wilfred Pickles) and Ada (Irene Handl) gradually fell in love after pensioner Ada met Walter, a gravedigger, shortly after the death of her own husband.

Though the pair are older than your usual newlyweds, they experience many of the same ups and downs in their marriage.

Episodes comprise: 'After the Honeymoon', 'The Journey', 'Housekeeping', 'The Eviction', 'A Lunchtime Drink', 'The Royalist' and 'The Mortgage'.