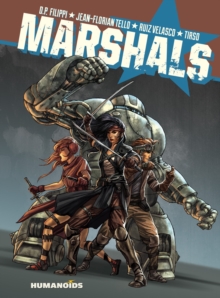 The city planet of Iriu is run by various consortiums and clans.

Within this complex political and financial authority the Marshals are in charge of security and defence, assisted by huge robots.

The young Hisaya Tetsu is considered one of the top Marshals, despite her unpredictable nature.

But her destiny takes an unexpected turn when she finds herself wrongly accused of murdering a high-ranking scientist, and is forced to go on the run in an effort to clear her name.