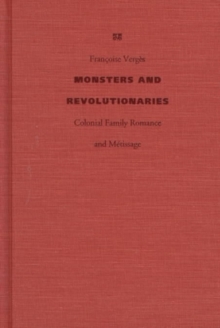 In Monsters and Revolutionaries Francoise Verges analyzes the complex relationship between the colonizer and colonized on the Indian Ocean island of Reunion.

Through novels, iconography, and texts from various disciplines including law, medicine, and psychology, Verges constructs a political and cultural history of the island's relations with France.

Woven throughout is Verges's own family history, which is intimately tied to the history of Reunion itself. Originally settled by sugar plantation owners and their Indian and African slaves following a seventeenth-century French colonial decree, Reunion abolished slavery in 1848. Because plantation owners continued to import workers from India, Africa, Asia, and Madagascar, the island was defined as a place based on mixed heritages, or metissage.

Verges reads the relationship between France and the residents of Reunion as a family romance: France is the seemingly protective mother, La Mere-Patrie, while the people of Reunion are seen and see themselves as France's children.

Arguing that the central dynamic in the colonial family romance is that of debt and dependence, Verges explains how the republican ideals of the French Revolution and the Enlightenment are seen as gifts to Reunion that can never be repaid.

This dynamic is complicated by the presence of metissage, a source of anxiety to the colonizer in its refutation of the "purity" of racial bloodlines.

For Verges, the island's history of slavery is the key to understanding metissage, the politics of assimilation, constructions of masculinity, and emancipatory discourses on Reunion. 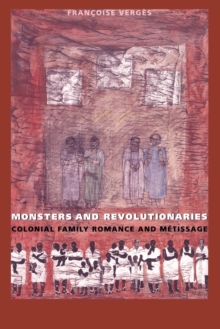