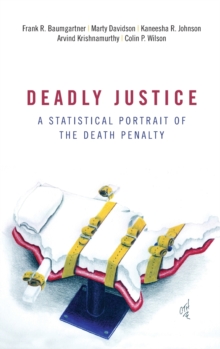 Deadly Justice : A Statistical Portrait of the Death Penalty Hardback

In 1976, the US Supreme Court ruled in Gregg v. Georgia that the death penalty was constitutional if it complied with certain specific provisions designed to ensure that it was reserved for the 'worst of the worst.' The same court had rejected the death penalty just four years before in the Furman decision because it found that the penalty had been applied in a capricious and arbitrary manner. The 1976 decision ushered in the 'modern' period of the US death penalty,setting the country on a course to execute over 1,400 inmates in the ensuing years, with over 8,000 individuals currently sentenced to die.

Now, forty years after the decision, the eminent political scientist Frank Baumgartner along with a team of younger scholars (Marty Davidson, Kaneesha Johnson, Arvind Krishnamurthy, and Colin Wilson) have collaborated to assess the empirical record and provide a definitive account of how the death penalty has been implemented.

Each chapter addresses a precise empirical question and provides evidence, not opinion, about whether how the modern death penalty has functioned. They decided to writethe book after Justice Breyer issued a dissent in a 2015 death penalty case in which he asked for a full briefing on the constitutionality of the death penalty. In particular, they assess the extent to which the modern death penalty has met the aspirations of Gregg or continues to suffer from theflaws that caused its rejection in Furman. To answer this question, they provide the most comprehensive statistical account yet of the workings of the capital punishment system. Authoritative and pithy, the book is intended for both students in a wide variety of fields, researchers studying the topic, and-not least-the Supreme Court itself.